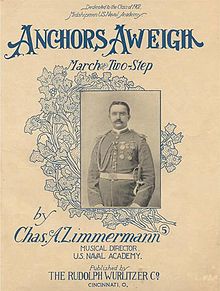 The word ‘aweigh’ is now only used in this little phrase. An anchor that is aweigh is one that has just begun to put weight onto the rope or chain by which it is being hauled up. Sailors were fond of adding ‘a’ to words to make new ones, for example, ‘astern’, ‘aboard’, ashore’, ‘afloat’, ‘adrift’, ‘aground’, etc. (https://www.phrases.org.uk/meanings/anchors-aweigh.html)

I’d like to dedicate this song to my friend and senior Naval officer, S.L., and thank him for his service.