John Walter Bratton, died on this day (February 7) in 1947. Bratton was a Tin Pan Alley composer and wrote “The Teddy Bears’ Picnic” in 1907.  I guess that makes the song 102 years old! He wrote it without lyrics, and during the silent film era it was used as background music for a number of popular movies and later, even as background music in some of the Looney Tunes cartoons. He wrote over 250 songs, but this song is his only lasting hit.

Interestingly, Kennedy, in a career spanning more than fifty years, wrote some 2000 songs, of which over 200 became worldwide hits, and about 50 are all-time popular music classics. Until Lennon and McCartney, Kennedy had more hits in the United States than any other Irish or British songwriter!!!  [Incidentally, Stephen, Kennedy also wrote “South of the Border”, a popular song describing a trip to Mexico, inspired by a holiday picture postcard he received from Mexico. Frank Sinatra recorded “South of the Border” when I was 2 weeks old! But I digress.

“The Teddy Bears’ Picnic” was one of the earliest sound recordings, released by Edison Records in 1907 as a two-minute cylinder (cylinders were used before records were invented!) Many cover versions were recorded over the years by various artists, more recently by Bing Crosby, The Nitty Gritty Dirt Band, Rosemary Clooney, Dave Van Ronk, Jerry Garcia and Anne Murray. I used to play it for my son as he marched around the living room in costume! I wonder if he remembers that?

And finally, for all you nerds, one last bit of trivia: A 1932 recording of this song had especially good quality with a large tonal range. It was used for more than 30 years by BBC audio engineers (up until the early 1960s!) to test and calibrate the frequency response of audio equipment.

This recording is dedicated to my friend, patient and fellow music lover, Stephen S. 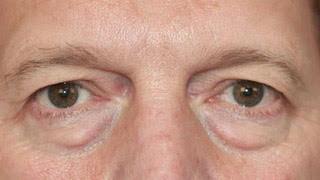 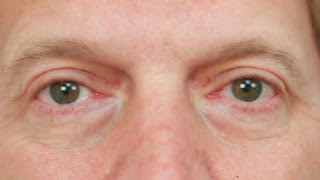 I love sharing music of course, but I also love sharing the improvement my patients can see from one of the many rejuvenating procedures we do here at the office.

Our photo of the week features a male patient before and after cosmetic eyelid surgery.  Notice the symmetrical upper lids now free of extra skin, and the absence of dark circles!